We recently asked successful writer, producer Gerry Renert to tell us about his creative process and how he’s made his dreams come true.

I’ve been a writer almost my entire adult life and started off writing advertising copy with the challenge always being to convey as much as possible using the fewest words possible.  Although I didn’t feel very good about trying to sell products people didn’t necessarily need, copywriting served as a fantastic training ground for me.  It became especially evident to me later, when writing children’s books.

My first children’s book, NATHAN SAVES SUMMER, was more an experiment than anything else.  I had just co-created the children’s animated series, ToddWorld, which ended up being EMMY-Nominated three times for “Outstanding Animated Children’s Program.”  When one of the TV episodes I was involved in was turned into a children’s book, I said to myself, “This is a lot like good advertising – telling a story in as few words as possible, but this time the message wasn’t about a new type of razor blade, it was about something important which could help shape a person’s life.”  So, I figured I’d give it a whirl.

The first draft of NATHAN SAVES SUMMER (Raven Tree Press, 2010) was written over a weekend and published five years later, after I had just about 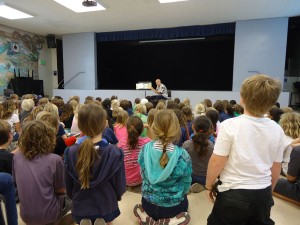 given up the thought of ever being a children’s book writer.   Thankfully, the book has been successful, earning a “Moms Choice® Gold Award.”   When the publisher approached me about doing a second book, they asked me what topic I would like to bring to the forefront.  It didn’t take me very long to think about taking on the topic of bullying.  Part of that was because of a story I saw on the news about a child committing suicide because he couldn’t handle being bullied.    The other part was because, I, too, was bullied by an older kid who lived several houses away from me when I was growing up in Connecticut.   When you’re very young, being bullied is the only thing you think about.  It haunts you, and there aren’t many people you can turn to for help or advice.   Thankfully, before attempting to write the book, I sought out the advice of a psychologist to try and learn the dynamics that go into the thinking of both the bully and the victim.  The resulting book, NATHAN AND THE REALLY BIG BULLY (Raven Tree Press, 2012,) is about a penguin in the lagoon being picked on by a Hyena.  The Penguin turns to Nathan for advice and Nathan, amongst other things, reinforces the importance of not striking back, in that two wrongs never make a right.   At the same time, an elephant comes into the lagoon and continually sprays Nathan with water from his trunk.    Does Nathan take his own advice or does his anger get the better of him?  I can’t give away how the story ends, as I’d get a slap on the wrist from my publisher and their PR department.

This summer you’ll also be able to read another book – not in the Nathan series—but the beginning of a new series, entitled BRAVE ROONEY.  This book will start out as a digital book, only available on iTunes and then possibly the Android phone/tablet platform.  The developer hopes to also release the title in Chinese, for Mainland China.

The process of writing for me is very relaxed and disorganized.  Sometimes I write on a yellow pad, lying outside Saturday, on a hammock.   Other times I sit at a real desk with a computer, being deadly serious and not wanting to be disturbed.   The one thing in common is that I always write, wearing black, Bermuda-styled shorts.  I’ve come to think of them as being as important as a pen or computer keyboard (or maybe they’re just for good luck.)

Gerry Renert has been a writer/producer for over twenty years.  He began his career writing for prime time TV sitcoms and wrote episodes for two of the highest rated TV series in the history of CBS.  Gerry moved onto writing theatrical screenplays and developed original projects for Warner Bros. and Twentieth Century Fox.  In 2002, in collaboration with Little, Brown and Company book author/illustrator Todd Parr, Gerry created the animated preschool TV series. TODDWORLD.  The series aired in most major territories around the world and has won three “Parents Choice” awards, an “iParenting” Award, a “Silver Hugo” at the Chicago Film Festival and two “Humanitas Certificates.”  Gerry has been EMMY nominated three times (as co-creator/Executive Producer) for “Outstanding Animated Children’s Program.”  In 2006, he managed all rights (publishing, merchandise, etc) and developed the Simon & Schuster Book Series, ALIEN CLONES FROM OUTER SPACE, as an animated TV series, licensed to ABC Australia.  His first children’s picture book, NATHAN SAVES SUMMER, was published in 2010 by Raven Tree Press, and was awarded a “Mom’s Choice® Gold Award in the category of “Picture Books:  Adventures, Adventurers and Heroes.” The title was chosen as a Children’s Book-of-the-Month Club selection and ranked among the top one hundred selling books on the club site.  Book two in the NATHAN series, NATHAN AND THE REALLY BIG BULLY, publishes in 2012 from Raven Tree Press.  The first title in his next book series, entitled BRAVE ROONEY, will be released digitally and available in 2011 on iTunes North America/ and China. The title will be the first in the ROONEY series.