Vorhees, New Jersey – The Young Masters Discovery Program at Naudain Academy concluded last week. The extended day children proudly wore the headdresses they created as they received their certificates and shared what they had learned with their friends – the Secrets Of The Heart 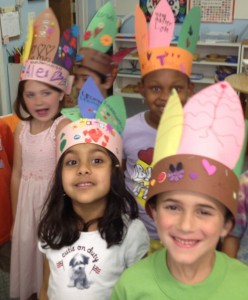 During the final celebration each Young Master held the microphone and had a turn reciting the Young Masters Pledge.  Confidently each stepped forward to say what they now seemed to believe about themselves and…they appeared to know what that meant.  “I promise to use my gifts everyday, in everyway for I am a Young Master.”

Children were quick to answer what their favorite Secret of the Heart was and why and Stephanie gently probed them with questions to find out what stories and lessons resonated most with them.  Some children loved using their “creativity” and “imagination” during the program, some children said “friendship” and “love” were their favorites.  A number of children talked about “courage” being their favorite “secret”, because they learned to face their fears and a handful of students liked “gratitude” best!  Stephanie reminded them that all of the “secrets” are important to practice.

Wearing their colorful Young Master headdresses, each student received their certificate of completion.  Something they could hang on their wall at home to remind them what they had accomplished, and they would now bring home the Young Master Journals that they had spent class time creating and adding to during the year.

“Tell us something you learned during the Discovery Program?” asked Miss Stephanie.  One young boy raised his hand.  “I learned I have gifts to share,” said one Young Master. “Yes!” said Miss Stephanie.  “I am so proud of all the students of Naudain. It takes real courage for a child to stand up in front of their class and recite the Young Masters pledge all by themselves or to express their feelings about the program. I’ve witnessed a lot of growth with the children and I know they felt equally proud of themselves when they held their Young Masters certificates up for one last class photo.”

“I believe each child felt a little bit like Butaan, Phlyos or EEtha as they wore their Young Masters headdresses.  They really connected twith the characters in the books, loved the messages in the stories and wore wide smiles each time they sang the songs on the CD’s. I believe that First grade will be a little easier for these students.  They understand some very important concepts that will serve them well in the days and years ahead.

Many of the children were sad the program was over.  “Miss Stephanie, will you be at my new school?” asked one little girl. “You can take me with you in your heart,” said Stephanie.“You’re a Young Master!”

Stephanie Pelly conducts the Young Masters Little Wisdom Program at Montessori schools and centers in New Jersey.  If you’d like to schedule the program at your school, contact Stephanie Pelly at ment2btrue@aol.com.

Naudain Academy is a Montessori School