Voorhees, New Jersey – Naudain Academy, a Montessori school, continued their quest this week to make sure their children have a well-rounded education by once again embarking on their journey to the Secrets of the Heart via the Young Masters Little Wisdom Discovery program which began in November.   The first day back at school from holiday vacation was right on target.  A brief conversation with three teachers on their lunch break about the holiday gifts children received revealed how so many gifts have to do with technology and that they usually require batteries or electricity and call for little use of imagination.  “How ironic,” Stephanie replied,  “that’s today’s lesson.  It’s all about imagination.  Something for which you don’t need batteries or electricity.”  They agreed that technology is important, but that nurturing a children’s creative play and imagination and encouraging children to understand  how powerful their imaginations are, is essential.  “Imagination is more important than knowledge,” said Albert Einstein. 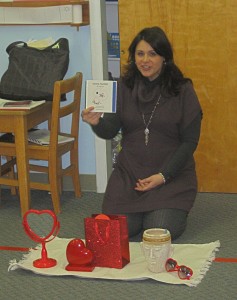 After a very warm welcome from the children, they asked, “are we going to begin with the Young Masters pledge?”  “Of course,” Stephanie said, as  they all stood up and proudly shared the words.  “I promise to use my gifts everyday, in every way, for I am a Young Master. Peace!”  As the word peace resounds louder and louder each week, Stephanie realizes that their understanding of the gifts they are learning about is beginning to set in.

“Today there is another gift to discover, a new Secret of the Heart. Today we’ll  be reading a new book by Bunny Hull called The Magic Eye,” said Stephanie.  “Before I share the story,” she asked,  “does anyone know what a Magic Eye is?”  One child said, “my dreams,” another  said, “it’s when you see love!”  One little girl said, “it’s what you see at night when your eyes are closed.”  Revelations out of the mouths of babes.  “Brilliant ideas,” Stephanie said, as she pulled out the next Secret of The Heart.  “Your Magic Eye boys and girls is your imagination.  Artists use their Imagination when they create.  A story writer and song writer use their imagination when they think about the characters for their stories and words for their songs.  “Do you use your imagination?” Stephanie asked, ” do you use it on the playground or while you’re driving in the car with their parents?  How about when you’re deciding what to wear in the morning.”  “Yes!, the children said.”Can you use your imagination when we you’re laying in bed or feeling bored?  Does your imagination cost anything to use?”  “No,” they said, it’s free.  “What a powerful gift we have,” Stephanie said,  “and it doesn’t even cost anything to use.”

“Today Butaan and Phylos, the characters in the book, are going to teach us different ways they use their imagination,” said Stephanie,  and I think instead of me reading the book today we’re going to listen to Saphinne.  She’s the storyteller who reads the story on the CD.”  The children loved the story and were amazed how Phylos could use his imagination when he was afraid of the dark.  The children learned from the story that their imagination  is in their mind.   It’s the pictures you see and create in your mind.  It’s your Magic Eye.

After listening to the story and looking at the pictures, Stephanie put on some quiet music, turned off the lights and told the children that they were going to practice using their imagination, just as if they were laying in bed… in the dark.  The children closed their eyes and put their heads down.  After a few minutes Stephanie started to count backwards 10, 9, 8, 7, 6, 5, 4, 3, 2, 1.  Then she asked the children to sit up and share what they saw with their Magic Eye.  “I was at the beach,” said one.  ” I was playing in the snow,” said another. ” I was laying in my bed under the covers and I was flying.”   “I imagined I was picking flowers”.  “How beautiful,” said Stephanie. “What wonderful imaginations you have!”

Stephanie asked the children if they could draw a picture about what they saw with their Magic Eye or write a story or create a song using their imagination.  They all agreed they could.   An activity for their journals to carry them through the week.

Stephanie told the children that each and every one of us is born with a Magic Eye and that they can use it at any time, anywhere for their whole life. “How about that!”

Next from the Young Masters Little Wisdom Discovery program the children learn about The Hidden Treasure.  What will be the next Secret of the Heart?  Stay tuned!