Voohees, New Jersey –  It was a rainy day and the children were ready for some indoor fun.  The theme of imagination continued on their favorite day, the day Stephanie comes to conduct the Young Masters Little Wisdom Discovery program .  As always Stephanie Pelly began with the Young Masters Pledge.  “I promise to use my gifts everyday, in every way, for I am a Young Master.”  As they reviewed what they had learned during the last class, the children remembered that their Magic Eye was –  inside their mind.  Stephanie asked, “when can you use your imagination?” “On a rainy day like this,” one little boy answered, “or when I’m laying in bed, driving in a car, at school or with my brother, sister or friend – anytime.” 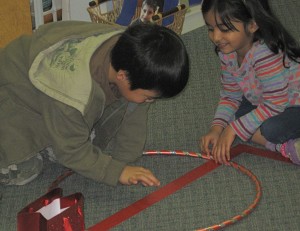 Today they played imagination games, beginning with The Magic Circle. One child at a time came up to the front of a classroom and began using their imagination to create something in the hula hoop.  One girl pretended the hula hoop was a mirror and she held it up to look at herself and strated to brush her hair.  Classmates took turns guessing what she was doing.  Another child pretended The Magic Circle was a garden of beautiful flowers.  One by one she picked a flower and brought it up to her nose to smell its fragrance.  Another young boy imagined he was typing on a computer. Even Stephanie took a turn, making a big snowball and throwing it at one of the children.  Lots of fun!

The second game they played was Magic Ball.  Stephanie used her imagination as she pretended to pull a magic ball out of her pocket.  She bounced it and tossed it in the air.  Finally, she called someone’s name and threw to them.  Using their imagination they caught the ball with both hands and passed it to a friend next to them.  The imaginary ball moved around the circle being rolled, tossed and thrown across the room even like a pitcher does in a baseball game.  Sometimes the ball grew really really big and sometime the magic ball became very small.  The children got a chance to stretch their power of imagination.

The last group activity for the day was story time.  Everyone worked together to create a story.  Stephanie began by holding up a microphone.  “Once upon a time,” she said.  The next child held the mic and

continued, “There was a little boy.”  The story unfolded with each child speaking into the microphone to add their new idea.  It went something like this:  “A little boy was watching tv… and then he saw something on the news… he got scared and then went into his bedroom… and began dreaming…he dreamed about a door that was opening… and then he heard someone calling his name…he woke up only… to later hear his alarm clock ringing… he was just dreaming.”  The children cooperated by taking turns and their story was told.  “We all have a story to tell,” said Stephanie.

The program ended today by singing Thank You For Being Here and then they quietly laid their heads down to listen to some soft, gentle music.  This was one more opportunity to use their imaginations.

Stay tuned for our next Young Master LIttle Wisdom Discovery adventure.  See you next time!