In celebration of Earth Day, master teacher Stephanie Pelly facilitated the Young Masters Discovery Program at Naudain Academy as they focused on this weeks 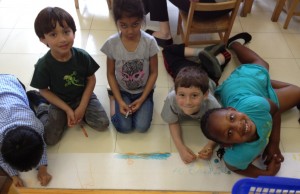 “secret” CREATIVITY by working together on a group art project that now hangs in their classroom and the school hallways.  The project all began as children discovered creativity by reading “Young Masters: The Invisible Power.”  Everything begins with an idea.  …one simple idea – from the light bulb to an airplane. Earthday…aperfect place to begin for a group creativity project. As Stephanie lead the children in creating an Earthday mural, the children took turns drawing pictures of the earth and then switching positions with their classmates to continue drawing in a new area.  The goal of this activity was to teach the children that they could create an art project as a group! “Once an idea is introduced it can take a group of people to help make it successful,” said Stephanie. “You each have something important to add,” she said as they selected a different color crayon to add their special touch!  Songs from the Young Masters CD provided a beautiful, musical backdrop as children added birds, people, flowers and trees in all different colors.

After they completed the group project, Stephanie talked about the creative writing and arts project in their Young Masters’ journals.  The children were asked to create and draw their very own cartoon character.  “Create your very own character,” said Stephanie, “like the illustrator Kye Fleming created Phylos, Butaan and EEtha in the Young Master books or like the characters you see on television or in other story books.” 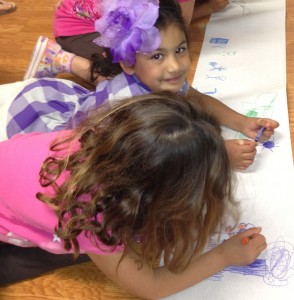 Before the class was over, a couple children asked if they could share their creative art projects from their “at-home” work the week before.  Stephanie was fascinated by their imagination and creativity.  Some children used the same materials, one of those was tin foil, but each created a unique idea.  One girl made an ocean scene with tin foil and candy while another boy used a paper towel roll and tin foil to make a jousting sword.

All in all, a perfect way to honor earth day, by recycling materials and using creativity to make something!  And after all – look at Mother Earth – is she not the epitome of creativity?

They closed with the Young Master’s pledge.  A reminder that each Young Master has gifts share with the world and makes a promise to use those gifts. 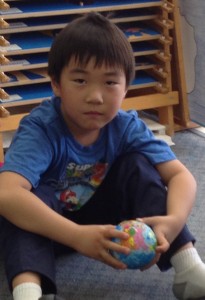 Next the Young Masters of Naudain Academy have one more book to read before the school year comes to an end – Young Masters, This Little Light!  How perfect to conclude with love.  The love that is their’s to take into the summer and shine their light into the world as the Young Masters they are.   Every child is born to change the world in a way that only they can.

See you next time.